I don’t smoke… I don’t know how to smoke. As I write this, I’m eighty plus, and I never smoked so much as one cigarette. In fact I never even tried it. The closest I came was about forty years ago when my kid sister’s ex talked me into taking a drag on his water pipe. Nothing happened, and besides it burned my throat.

I tried that same stuff a few years later in some onion dip and again in some chocolate brownies, but that might someday be ‘food’ for a future blog.

When I was going to school in the 1940s it seemed as though everyone smoked. My dad smoked cigars and a pipe and my mother, Chesterfield cigarettes. Though most of my jock friends didn’t, their girlfriends smoked. Smoking was everywhere among the high school and college crowd. It was not easy to find a date who didn’t smoke.

Even when a smoker might restrain herself temporarily out of courtesy to me, her dress smelled of smoke and her hair smelled of smoke. And… as for romance… well I tried to remember to bring along a packet of Sen-Sen, the era’s terrible tasting little licorice chip they advertised as “breath perfume”.

There were no anti-smoking campaigns in those days. At her college graduation party the night I first met Elayne she was smoking, as was everyone else. However, after our first date, she never smoked again in my presence and she gave it up completely the day we were married.

However, I have a history with tobacco that goes back many years. 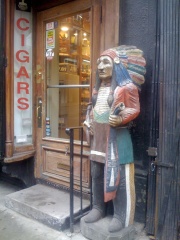 My grandfather, Ike Nathanson, was in the tobacco business as were two of his brothers and at one time or another five of his sons, including my father. Ike ran Nathanson Cigar and Tobacco, a wholesale company. His brothers owned cigar stores which also included what they referred to in those days as “cigar factories”.

A “cigar factory” in Minneapolis at the time was often a man or two in the front window of a cigar store hand-rolling tobacco leaves into various shapes and sizes to order for the store’s clientele. Often the cigar maker was foreign born, usually an immigrant from Eastern Europe who came over to this country during the time of the progroms.

I think I can attribute my aversion to smoking to my grandmother, Rose Nathanson’s, famous Sunday feasts which were attended often by twenty or more family members including her sons, brothers-in-law and nephews, most of whom adjourned to the living room after dinner and lit up cigars. 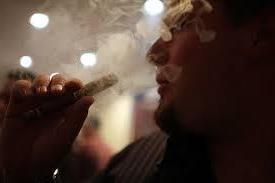 The smoke was so thick in that living room you couldn’t tell who was yelling at whom. In my Dad’s family everybody argued and everybody yelled. I loved it. However, I’m sure those after dinner Sundays at 801 Elwood had something to do with my personal problem with smoking. During those below-zero Minnesota winters when all the windows in that house were closed, one couldn’t breathe anything but cigar smoke.

Cigars, however, were the “bread and butter” in my dad’s family. Nathanson Cigar and Tobacco was an institution in Minneapolis, however as imported Cuban tobacco became popular and American companies began manufacturing cigars, the family discontinued its one-man cigar factories. What with the popularity of American brand cigarettes, which could be purchased in any drug or grocery, the Nathansons inevitably closed their retail stores. The family went on to expand their wholesale operations however, which by then included a full line of products from pipe tobacco to chewing tobacco and of course cigarettes, ready-made and roll-your-own. What with the customer base evolving as it was, the “Wholesale House”, as they referred to it in those days, added complete lines of tobacco accessories as well as candy, gum and miscellaneous sundry products.

In the early 1930s my father sold cigars, cigarettes and chewing tobacco to drug stores, restaurants and bars in a three state area. Not too many years later I too worked for the “Wholesale House”, as did my brother Gary, first as a stock boy, and later when I was in college, I had my own sales and delivery route.

During World War II cigarettes were especially hard to get. I don’t recall whether it was due to a scarcity of raw tobacco or just a labor shortage. As a result there was, what was then, a thriving “black market” in the popular brands.

It wasn’t unusual to see a shipment of cigarettes shorted by a case or two or find that several had disappeared from the warehouse overnight. I personally saw one of the employees loading a couple cases of Lucky Strikes into the trunk of his car, late one afternoon.

When I reported the theft to my immediate supervisor, I was told to forget about it, as the culprit was my uncle’s brother-in-law. I mentioned it that evening to my father, and I never saw that guy around the place again.

Kings of the road

During the early nineteen-forties my folks moved to a home on a beautiful lagoon between two lakes on the west side of Minneapolis. Though ours was in an upper-middle class neighborhood, there just happened to be a Great Northern Railroad switch yard only a block or two away. It’s gone today however, replaced by a park with bike and jogging trails.

Seldom did a week go by in those days that we didn’t get a knock on the door from a jobless traveler or two looking for work in exchange for a meal. They were always welcome at our house. They would offer to mow the lawn, rake leaves, shovel snow, but it really wasn’t necessary. They were “down and out on their luck” my Dad used to say, and they could be assured of a healthy meal at our place.

Waiting to be discovered

Many were veterans of World War 1 and had wonderful stories to share with the boys in our neighborhood. We were entranced by their tales of travel by freight across the United States. Their adventures included wonderful stories about life on the “open road”. My favorite was the one about The “Lost Dutchman’s Gold Mine. For all I know it’s still out there somewhere waiting to be rediscovered.

As kids we would go over to the switch yard and jump on the ladder of a slow-moving freight. Sometimes we would hitch a ride home from high school on a freight car and just hang on the ladder for a mile or so. How none of us got killed, I’ll never know.

I learned more than one lesson by watching my parents interact with these men. At no time were those unfortunate guys made to feel like bums. They enjoyed the same quality food my mother served the rest of our family.

We never heard the word “hobo”, “bum” or “tramp” around our house. I was told that they were “unfortunate men” “down on their luck” to whom, in a small way, we were lending a helping-hand.  Some worked in the CCC (Civilian Conservation Corps) which offered employment to World War I vets to help build the country’s national park system.

Those railroad workers and traveling migrants provided my first exposure to roll-your-own cigarettes and chewing tobacco. However, on the few occasions that my dad was home during an afternoon, he might offer a “down and outer” a real treat, a cigar; not just a five or ten cent White Owl or Roi-Tan, but maybe a twenty cent El Producto, the brand movie stars smoked.

Chapter 2… Tobacco has quite a history. [Open]